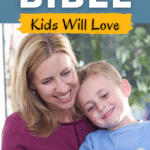 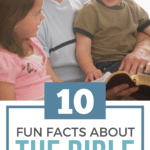 Kids gravitate to facts. Here are fun facts about the Bible that your kids will love. They’ll want to know even more about God’s Word!

“Mom! Did you know that Pharaoh thought he wouldn’t live forever unless his name was remembered? That’s why we still know the names of the pharaohs!”

Well, most of the pharaohs, anyway.

The book of Exodus begins with a short list of the sons of Jacob (Israel), telling us the people of Israel multiplied in the land of Egypt.

Exodus 1:7, ESV, says, “Now there arose a new king over Egypt, who did not know Joseph.” The king, or pharaoh, felt threatened by the sheer number of the Israelites, and so enslaved them. He then hatched a plan to have the Israelite midwives kill the Israelite male babies. Exodus 1:15, ESV, begins this section, saying: “Then the king of Egypt said to the Hebrew midwives, one of whom was named Shiphrah and the other Puah…”

The Israelite midwives don’t kill the babies of their people, and God rewards them for this brave act by giving them families. It would seem they were also rewarded by having their names recorded for all generations to remember.

It is interesting, then, that the Holy Spirit-inspired authors of Scripture record so many names of historical kings and queens who interact with Israel–but they don’t record the name of the pharaoh overseeing the Exodus, a central event in Old Testament history.

Fun Facts about the Bible

Kids love facts. They gather up trivia and off-topic details, ready to whip them out and display them at the slightest provocation. That’s why your child knows more than they’ll ever need to about slugs or World War I era planes or Minecraft. Facts are fun. Facts about the Bible are fun, too.

The fact that the king of Egypt during the time of the Exodus isn’t named in Scripture is not a mistake–there are no mistakes in God’s Word. When we discover the pharaohs were obsessed with having their names remembered forever, and then we see the names of the sons of Israel–and even of two female midwives–we can recognize that God’s holy justice takes a number of forms.

Let’s take a look at some fun facts about the Bible your kids will love!

Be sure to share these fun facts about the Bible with your kids!

The Bible is full of facts that are fun and amazing for kids to learn! In fact, your kids can spend a lifetime learning about God’s Word. There is no better time to start exploring Scripture with your kids than today.

Danika Cooley’s book Help Your Kids Learn and Love the Bible is your crash course on teaching the Bible to your kids. Danika is an award-winning children’s author and Bible curriculum developer. Her popular Bible Road Trip™ is used by tens of thousands of families.

Welcome to My Joy-Filled Life. My hope is that you will get inspiration for your home or homeschool here. Here you will find homeschool helps, parenting advice, thrifty living tips, activities for kids, recipes, and LOTS more!
168 shares
168 shares
0
0
Your Cart
Your cart is emptyReturn to Shop
Continue Shopping