We were blessed with our last and final bundle of joy this past summer, but it has taken my six months to finish writing her birth story and get it posted.  What can I say – having eight kids keeps a mama pretty busy!

Eight is enough for our family and I feel like my body is getting too old for this pregnancy thing.  This was the toughest pregnancy for me, both physically and emotionally.  Nothing too major, just more aches and pains than in the past, being the heaviest I’ve ever been with any other pregnancy, having more monitoring, and having gestational diabetes this time around just made the pregnancy a little more difficult than my others. 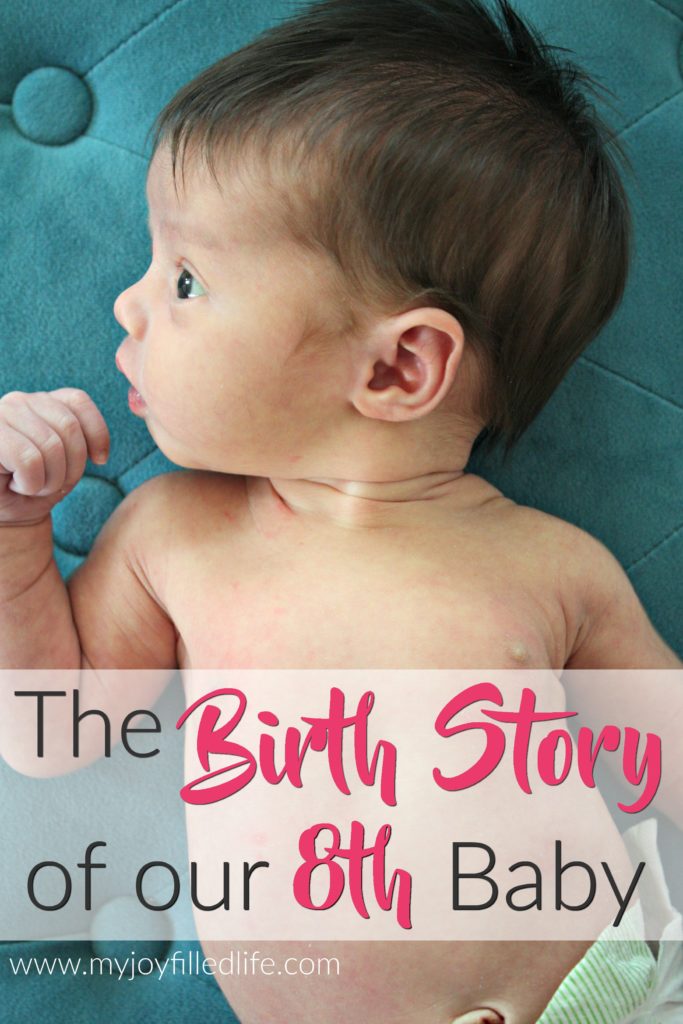 I was diagnosed with gestational diabetes kind of late in my pregnancy (due to switching care providers twice), so I had to endure all the effects of my blood sugar being out of whack until we finally figured out what was causing me to feel so awful.  Once my blood sugars were regulated (by diet) I felt so much better and didn’t gain any addition weight.  I usually gain about 50 pounds during my pregnancies, but this time I only gained 35 pounds.

Emotionally is was tough feeling so lousy all the time; feeling like I wasn’t being a good enough mom to my other children was hard.  I also seemed to worry more this time around.  You’d think I would have worried less since this was our 8th baby, but it was the opposite for me.  With the GD, being over 35, having had a miscarriage prior to this pregnancy, and requiring more monitoring this time just made my mind spin with lots of crazy, far-fetched scenarios and outcomes.

My midwife decided that it would be best for baby and I if we didn’t go past my due date.  While I didn’t want to be induced again, I had already made peace earlier in the pregnancy that however things ended (natural, c-section, induction), I would be okay with and be assured that it was God’s plan.  I wasn’t going to try and force my desired outcome or plan for this pregnancy, labor, or delivery.

My due date was Aug. 14th, so we scheduled the induction for Aug. 11th.  Being that we scheduled the induction in advance, I was able to have my mom plan to fly in from AZ and be there a few days before Hannah’s birthday and stay for about a week after.  I had initially thought I’d have my mom come after she was born, but as my due date got closer I decided it would be best if I had help with the house and other kids right after the birth.

Her birth couldn’t have been more perfect.  I think that giving up control and just letting things fall into place made that possible.

We arrived at the hospital on the morning of the 11th at 7am.  The plan was to have my midwife check my cervix (I never had her check me in the office) that morning and then decide on our plan of action.  My hope was that I would be around 2-3 cm so that she could break my water and see if things took off from there, but unfortunately I was only 1 cm.  We also had an ultrasound just to make sure Hannah was head down before we got things underway.  Thankfully she was.

Since I wasn’t dilated enough for her to break my water, we decided to use a double bubble balloon insertion paired with Pitocin to start with.  The double bubble thing was new to me – basically it’s a little balloon filled with saline that they insert in your cervix to help dilate it.  Once you hit about 5cm the balloon will fall out by itself.

With the balloon in and the Pitocin going, Jorge and I settled in, spending the majority of the morning and afternoon watching the Olympics, reading magazines, napping, chatting, and taking the occasional trek to the bathroom (going to the bathroom while hooked up to so many things is quite the production and I would delay it as long as possible).

I was tolerating the increase in Pitocin just fine.  The contractions were tolerable and the nurse was pretty amazed at how I was able to still have a smile on my face and be just fine despite the increases in Pitocin.

My mom and sister-in-law brought the kids to the hospital after lunch.  It was a nice break and distraction to see them all.  They came in a few at a time to see us and to love on their mama.  The plan was for them to stay at the hospital until Hannah was born so that they could meet their new sister right away and for any of the older kids to be in the room during the birth if they choose to.  I had packed a bag full of snacks and activities for the kids while they waited and thankfully the hospital had a nice family waiting area for them to hang out in.  They were able to come in and visit me as needed, or as I wanted. ?

As the Pitocin dosage kept creeping up and the minutes on the clock continued to tick away, I started to get concerned that I wasn’t making much progress.  The balloon thing to help me dilate would fall out once I hit 5 cm, and that hadn’t happened by late afternoon.  I started asking the nurse what we would do if I wasn’t progressing.  One of the options was to go home.  While I was bummed to even think about that being a possibility, I would much rather go home than spend the night in the hospital to rest and try later.

I decided to get the epidural shortly after that because the contractions were getting more intense and the anesthesiologist was going to be going into a c-section soon, so instead of being in excruciating pain and waiting for the epidural, I decided to get it before the pain was unbearable and the anesthesiologist wasn’t as readily available.  Plus, if this labor was anything like my others, once my water is broken, things really take off from there.

It was around dinner time at this point, so the kids went back to the waiting area and my sister-in-law went and grabbed them all some dinner.

I got the epidural at 5:30 in the evening and it took way longer that I would have liked.  We actually took a break for a few minutes after a couple of tries.  Apparently the spaces between my vertebrae are smaller than average, so the anesthesiologist had a difficult time getting it in place – not fun when you are experiencing painful contractions.

I was still 5cm after the epidural was finally in place so the midwife suggested using a peanut ball between my knees to help open up my hips which she said could help with dilation.

The epidural was strong and worked really well.  I couldn’t feel a thing.  That always makes it hard to tell when you are ready to push.  I’ve had epidurals that weren’t so strong and could still feel quite a bit.  There are pros and cons to both ways I suppose.

Since progress seemed to be going slow (and I say seemed because I couldn’t feel if anything was going on) I was beginning to debate what to do with the kids and when and if to send them home.  I really wanted them to be there for the birth (whether in the room if they wanted or in the waiting area) so they could meet their baby sister right away.  I decided that around 10 or 11 I would have them go home if no baby was in sight.

I really wasn’t feeling much of anything going on, not much pressure (like I said, that epidural worked well).  The kids were taking turns visiting with me and I decided since it was getting late that I would ask to be checked next time the midwife came just to see where we were at.  Jorge was in the waiting area with the little kids (I think he actually fell asleep out there on one of the couches) while I was visiting with my mom, Sam, Rachel, Lauren, Cora (my niece), and my sister-in-law.  The midwife came in and said she would check me, so we shooed everyone out.  This was probably a little after 8pm.  She checked me and I was 10cm!  So we called everyone back in and said it’s baby time!  I let the 4 big kids decide whether or not they wanted to be there for the birth, and the other 3 would stay in the waiting area with my mom, sister-in-law, and niece.  My 3 oldest kids decided to stay in the room and my next oldest decided to stay in the waiting area with the little kids.

The room quickly became a buzz with the nurses and midwife preparing for the delivery.  They were so accommodating to our family.  They welcomed the kids in and had no problem with them being there at all.  They even moved the bed so that the kids would have plenty of room up by my head rather than having a view of the actual delivery.  They helped the kids take pictures and record the birth too.  My midwife let my husband be the one to deliver Hannah.  This was something he had never done in any of our births – he even got all suited up for the occasion. 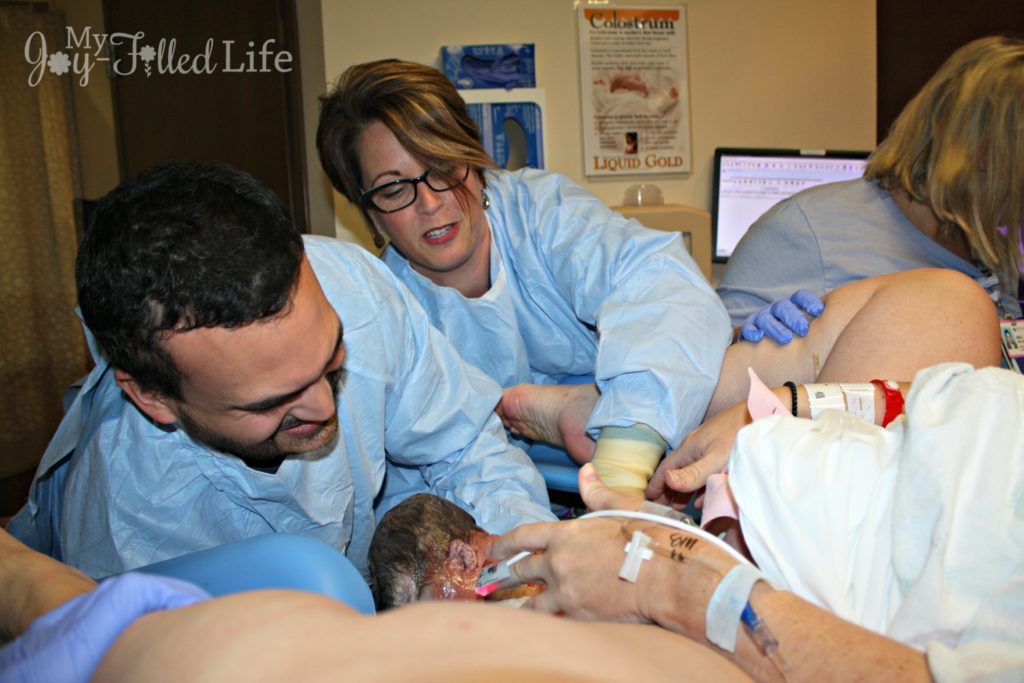 Hannah was born very quickly – with one long push she was born.  Jorge guided her out and handed her up to me.  She was absolutely perfect and beautiful, and weighed in at 8lbs. 4oz.  The delivery was so easy and painless; I’m pretty sure I gave my kids a false sense of what birth is like. 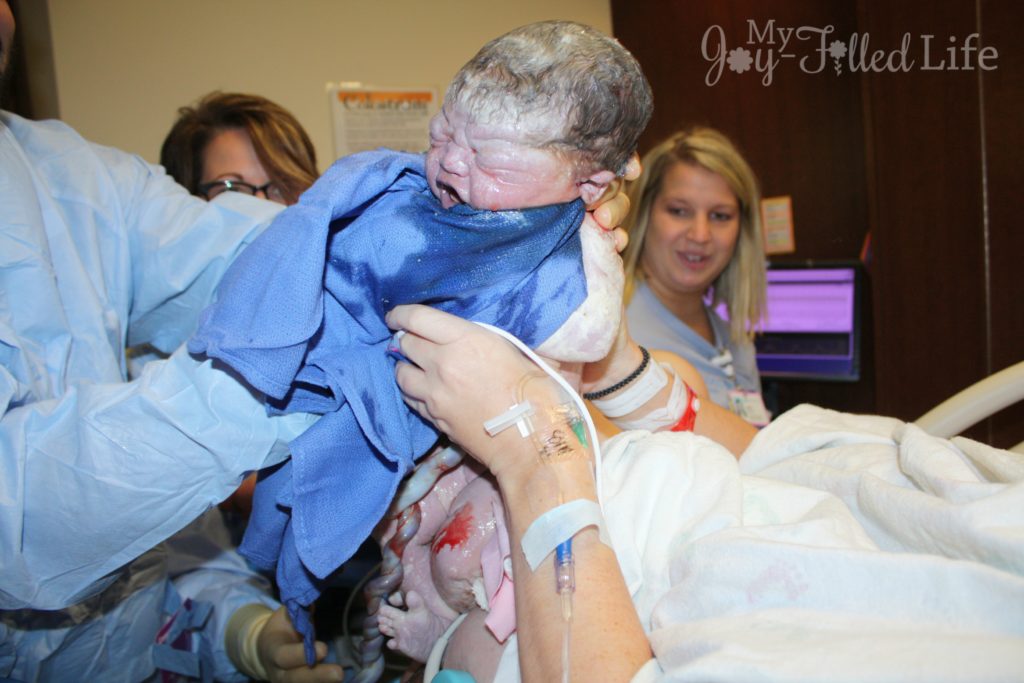 Since Jorge delivered Hannah, the 3 big kids cut the cord – Rachel put on the clamp, Sammy cut between the clamps, and Luke did the final cut.  After the placenta was delivered, the midwife gave the kids a little anatomy and physiology lesson about the job of the placenta and amniotic sac. 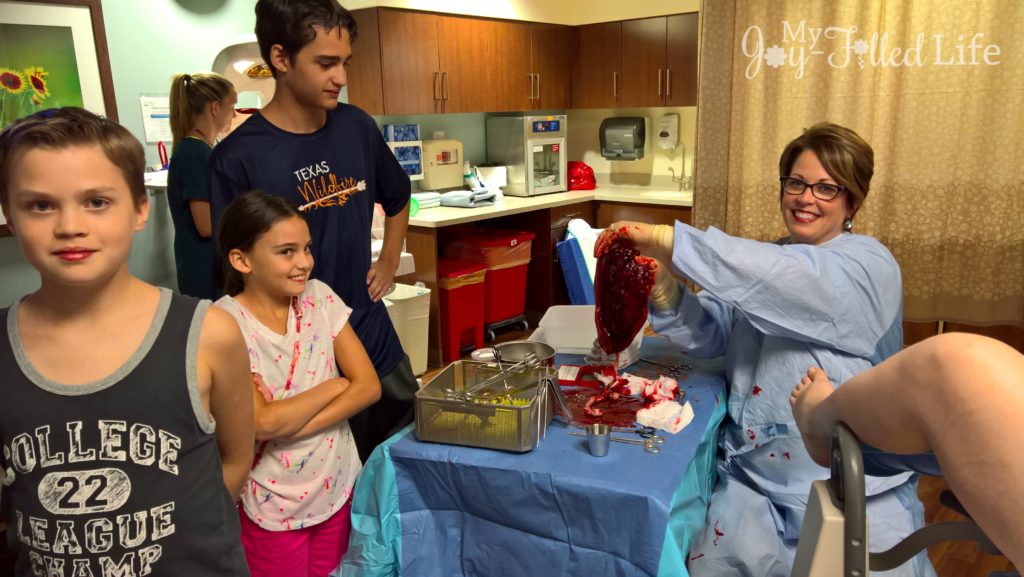 The other kids all came in shortly after that to meet their baby sister.  Everyone was just so excited and in awe.  They all took turns holding her – everyone was in love!  It was so nice to have our last birth be such a peaceful and joyful event that we could share as a whole family.  It was an amazing experience that I hope all the kids remember and cherish – I know I will. 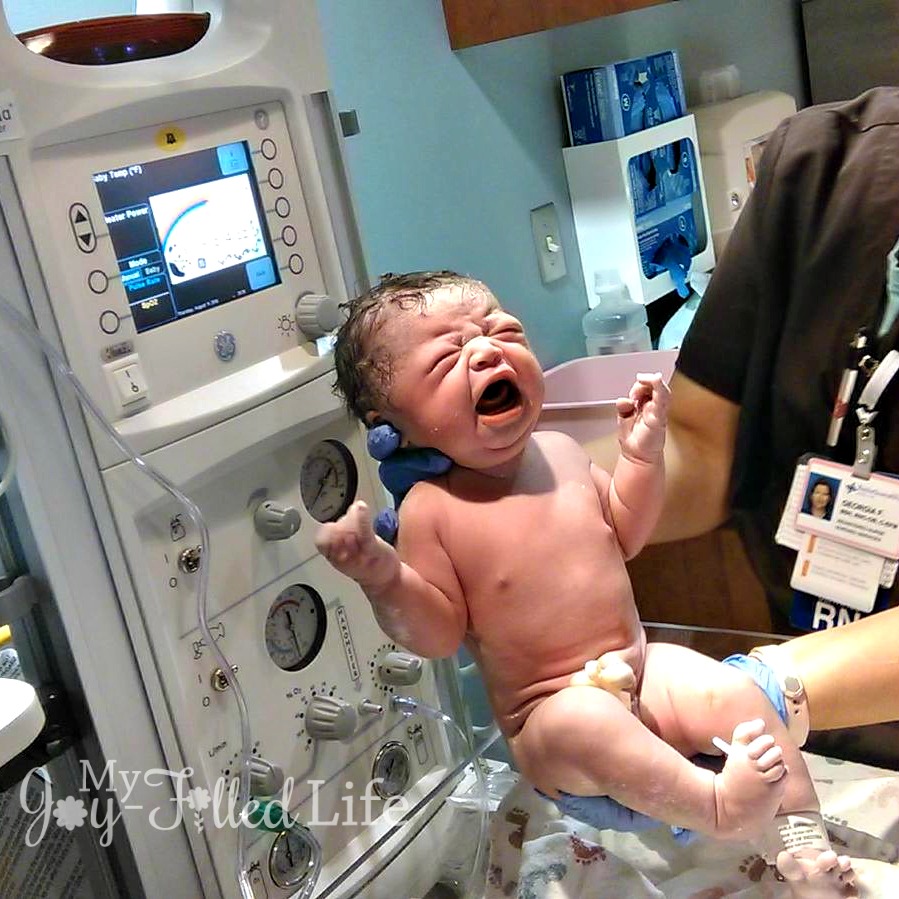 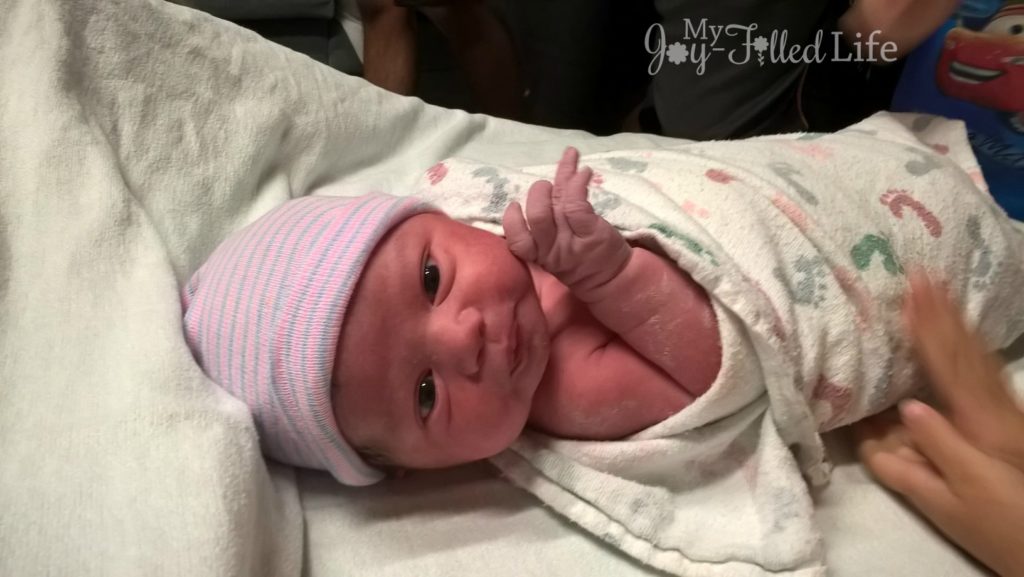 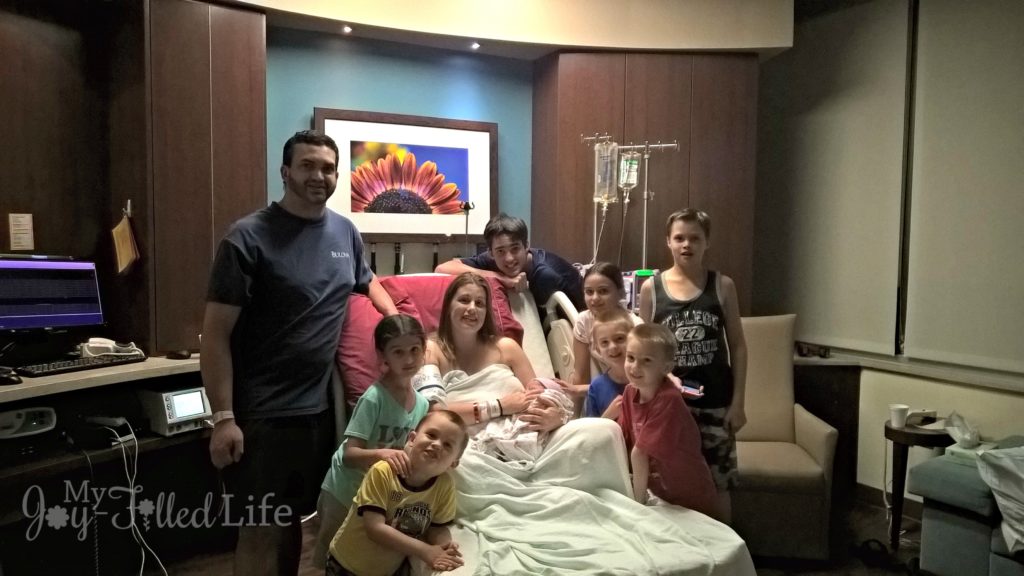 Welcome to My Joy-Filled Life. My hope is that you will get inspiration for your home or homeschool here. Here you will find homeschool helps, parenting advice, thrifty living tips, activities for kids, recipes, and LOTS more!
50 shares
50 shares
0
0
Your Cart
Your cart is emptyReturn to Shop
Continue Shopping